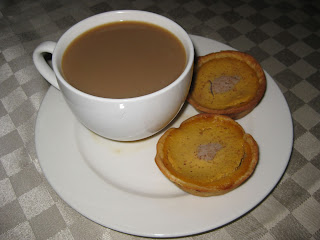 I usually buy chestnuts once a year and try to make something nice with them. I've made chestnut cakes, chestnut stuffings, and I think even a chestnut risotto one year. Given they're not cheap and have such a short season, one dish is usually all I get to make.

This year I've made my own chestnut puree by boiling the chestnuts, peeling them, simmering with water, milk and honey, then blitzing with the stick blender. I've combined this with the other great autumn ingredient, pumpkin, to make some mini pumpkin and chestnut tarts. The mixture contains some egg, cream, nutmeg and cinnamon.


I find that frozen pastry circles in a muffin tin don't need to be blind baked to come out nice and firm on the bottom - you just have to make sure you line the bases with baking paper so that they come out and don't get stuck. This recipe was also good because I was able to make the mixture the night before and then just had to quickly assemble and bake them before my afternoon tea guests arrived.