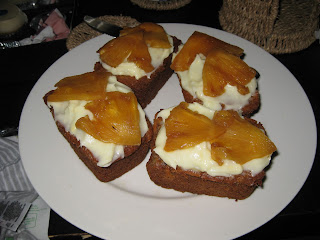 I remember reading about a certain Banana bread company that faced collapse when Cyclone Larry wiped out the banana crop a few years back. What do you do when your core business relies entirely on a foodstuff that has just tripled in price? They invented Pear and Raspberry Bread! It's a reminder not to get too set in your ways when cooking - it's easy to keep making the same thing over and over.


I've dragged out the old brown Margaret Fulton cookbook. It has some fantastic cake recipes, but there are three that are family favourites: Carrot and Pineapple Health Cake (so-called because it has oil instead of butter!), Banana Cake and Spiced Pumpkin Cake. Flicking through the book, there are plenty of other lovely recipes, so I'm going to try some new ones over the next few months. Carrot cake, though, is great to make in winter when carrots are so sweet and tasty. I also have a beautiful hybrid sweet pineapple. I decided use this rather than using the tinned pineapple in the recipe.


I thought I'd share my method for trimming a pineapple. I remember watching a japanese chef do this at a restaurant one night - it was a revelation! The problem with trimming a pineapple is how to get the "eyes" out without cutting so deeply into the pineapple that you lose all the flesh. The best bits, after all, are just underneath the skin. Cut the top  and bottom off the pineapple and cut off the skin, but don't cut too deeply - just enough to expose the flesh. Now look at the eyes - they spiral around the pineapple. Get a small sharp knife and make little v-shaped cuts to remove the eyes, moving around and down the pineapple. You're only just cutting enough flesh to remove the eyes, and making a pretty pattern at the same time! Then you can slice the pineapple as you need it. Another technique is to use a small melon baller to remove the eyes - a safer method if you're not great with your knife skills (perhaps a job for the kids!)
For this recipe I removed the core of the pineapple, finely diced it, then caramelised it with some coconut palm sugar. This is a sustainable alternative to regular palm sugar, and it tastes like a cross between palm sugar and brown sugar. I also caramelised some thin slices for the top of the cake. The cake also contains pecans and sultanas. To finish, I made a light cream cheese frosting which was a bit rushed and dodgy but did the job.


PS - I've finally realised why hybrid pineapples (such as Bethonga) are sold without their leaves. It's so the growers can protect the variety. This makes perfect sense when you think about it, but I'd never thought about it.

That method is genius!