Confession Time: I went shopping today and bought a new toy (a couple actually, but one is in the post).
This is my new cast iron wok. Isn't it pretty? 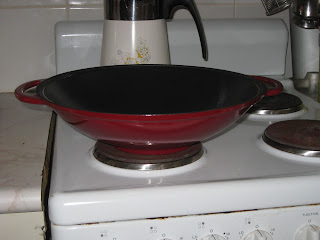 I have a very boring electric stove. I miss having a gas stove and I miss my carbon steel wok. I tried an electric version and it was ok, but the non-stick surface has given way, and it also took up a lot of precious bench space. This wok sits happily on the electric cooktop, and requires only a medium-high heat. Cast iron stores heat very well - I also have a cast iron pot and grill pan.
Tonight I used it to make one of my favourite stir fries - Pork Mince and Eggplant with a spicy sauce and glass noodles.
The Verdict: Nothing beats a well seasoned carbon steeel wok over a high gas flame, but this option will work well enough until the day that I can get a new stove (and some gas, or maybe induction).
Note: I don't bother salting and draining ("disgorging") lebanese eggplants - they are small and sweet. Often I don't bother usually with larger eggplant either - when cooking them with strong flavours such as garlic and soy sauce I don't tend to notice any bitterness they may have. If you generally find eggplant to taste bitter, then go ahead and salt them first. 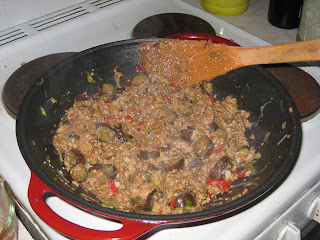 Pork Mince and Eggplant Stir Fry (serves 3-4)
500g pork mince (I get organic pork mince and it is delicious)
4 lebanese eggplants (or 1 medium eggplant), chopped
3 green shallots, sliced
2 tsp minced garlic
1 tsp minced ginger
1 long red chilli, de-seeded and finely sliced
1 tbsp soy sauce
1 tbsp oyster sauce
2 tbsp shaoshing cooking wine
1 tbsp water
1 tsp potato starch
1 tbsp sesame seeds
100g dried bean thread vermicelli noodles
Soak the noodles in boiling water, then snip through with scissors to make them easier to stir fry. Drain and set aside.
Mix the sauces  and water with the potato starch and set aside.
Heat the wok and add tbsp vegetable oil. When the oil starts to shimmer, add mince and cook until browned. You may need to do this in batches so that the meat browns nicely without stewing. Add garlic, ginger, shallots, chilli, and eggplant.
Cook for another 5-10 minutes until the eggplant is tender, then add the sauce mix and stir until it has thickened and become glossy. Finally, add the noodles and stir through. Sprinkle over the sesame seeds and serve.

Used up the last of the "oyster sauce" and glass noodles. I actually buy a "vegetarian stir fry sauce" that has the consistency of oyster sauce, but is made from mushrooms. I prefer the taste.